Although there survives very limited evidence concerning the social life of women during the Archaic and Classical periods, statues, figurines, reliefs and depictions on vase paintings do give information about the appearance of the women of those times. Some information about the social life and fashions of the periods can be gleaned from ceramic vessels and figurines from various regions of Anatolia.

The depiction of women’s heads on vessels, for example on the lekythoi and rhytons produced between the 6th and 4th centuries B.C. in centers such as Pitane 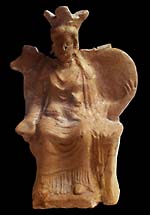 Figurine of Seated Cybele
Priene (Gollubahçe; Söke). Hellenistic Period, 2nd century B.C. Baked clay. Istanbul Archaeological Museums.
The figurine of the Mother Goddess Cybele is shown sitting on an ornamented backed throne with her feet resting on a footstool. She wears a long chiton, girdled beneath the breasts, and a long himation. On her lap lies a lion, her sacred animal.

(today Çandarli), Myrina and Xanthos (Kinik), show a local style of head-covering, of a type still worn today by native women of these districts. The female heads from Troy display a variety of scarf-like head-coverings and head decoration which must have been fashionable from the 3rd to the 1st centuries B.C. Some funerary busts, which both served as portraits and performed the function of a grave stele, present a different perception of women of the 2nd century B.C., with their grieving facial expressions, bringing to mind the women who are paid to mourn at funerals in certain regions even today. 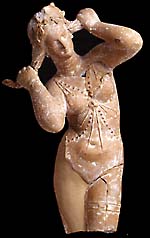 WOMEN IN THE WORLD OF RELIGION

The cult of the Mother Goddess was an important feature of Anatolian civilizations since the Neolithic times. In the Greek Period, the Goddess Artemis was the Mother Goddess Cybele in a variant form. The Archaic Artemision, the Sanctuary and Temple of 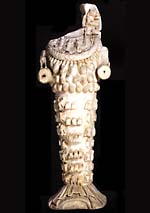 Statue of Ephesian Artemis
Ephesus (Efes; Selçuk).Roman Period, 1st century A.D. Marble. EfesMuseum.
The figure is shown standing very erect, with the lower part of the body like a column. The whole body is covered with relief designs which show the local characteristics of the Goddess. Within a garland above the breast are depicted signs of the Zodiac and winged Nike figures. Beneath the garland are rows of the eggs which symbolize fertility, and from the waist downwards are various animals, indicating Artemis’ control over the animal world. Among the animals is the bee, the sacred symbol of Ephesus. Within the curve of each elbow sits a lion.

, is an example of a cult center built on a site which had long been sacred to the Mother Goddess, who was transformed into Artemis during the Greek period. In the Classical Period, Artemis emerges as a goddess of the moon and hunting, and protectress of the forests. The altars from Çadirköy near Finike show a double form of the goddess, Artemis Tharsenike, who was the focus of a completely isolated regional cult in the 2nd century A.D. 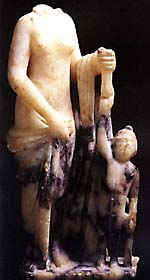 Aphrodite and Eros
Aydin, Karapinar. Roman. Marble. Istanbul Archaeological Museums.
Aphrodite is draped from hips downwards. In her left hand is an apple, her sacred fruit. Beside her stands Eros, naked, his right hand stretching up towards the apple.

Aphrodite is another goddess who reflects the maternal characteristics of the Anatolian Mother Goddess. In mythology she is the goddess of love and beauty, and she was a common subject for art, often depicted with Eros by her side.

Hecate, a goddess who takes no part in the mythological stories involving the Olympian deities, was closely related to Artemis and Anatolia. She embodied the forces of magic, with control over the moon, night and darkness, spells and witchcraft. She is often shown in triple form, with three heads or three bodies, thought to represent Hecate as child, young girl and adult. 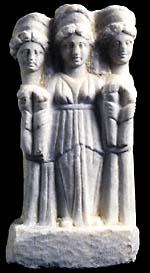 Tyche was the personification of Chance or Fortune. Her full title ‘Agathe Tyche’ meant Good Fortune. Her popularity increased throughout the Hellenistic period and into the Roman period. She is depicted draped, wearing a tall crown in the form of city walls to symbolize her role as guardian of cities. She usually holds a cornucopiae (horn of plenty), symbolizing her connection with fertility and prosperity, and often has her hand on a ship’s rudder, symbolizing her control over the direction of life.

Statues of Artemis and Aphrodite found in the three great Anatolian cities of Ephesus, Aphrodisias and Perge, are concrete evidence for this role of the goddesses. Representations of these mother-goddesses show them wearing a tall headdress and the figures bear various reliefs and motifs which testify to the traditional aspects of their characters.

With monotheism in the Byzantine period, the most frequently portrayed women was Mary. As the mother of Jesus. she was held in high regard and was an 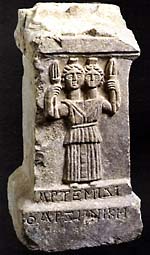 Altar Dedicated to Artemis Tharsenike
Finike, Çaldirköy Roman Period, 2nd century A.D. Limestone. Istanbul Archaeological Museums.
The altar found near the ancient city of Arycanda in Lycia represents Artemis Tharsenike, a local form of Artemis. On the stepped moulding beneath the relief the goddess’ name, with her local epithet, is written in Greek in two lines.

important figure in the Church from the Early Byzantine period onwards. Mary was commonly depicted with her son on the various mosaics and wall paintings of the Byzantine churches and palaces, representing the typical idealized woman of the period.

Tyche
Myrina (Kalabaksaray). Hellenistic Period. Baked clay. Istanbul Archaeological Museums.
The Goddess of Good Fortune is wearing long voluminous garments with rich folds, beneath which can be seen the fullness of her body. She is holding cornucopiae.

This site uses Akismet to reduce spam. Learn how your comment data is processed.